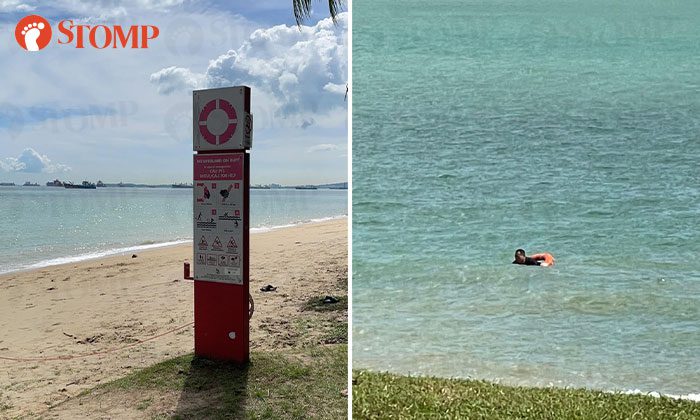 Man takes lifebuoy for ‘casual swim’ at East Coast Park: ‘It is just not appropriate’

This story was submitted via Web contribution form.

It is probably a good idea to use a flotation device if you are not a strong swimmer, but not when the device is meant for emergency use only.

Stomper Michael was concerned when he saw a man using a lifebuoy at East Coast Park on Jan 21.

He appeared to be using it for recreational use.

“I don’t think this is very wise taking the rescue device for a casual swim,” said the Stomper.

Michael told Stomp he was in the area from about 2.50pm to 3pm.

“We did not see the first man take the lifebuoy but we saw a second group taking another one 100m further and playing around with it at the water shore.

“We saw them throwing them in the sea and swimming after it.

“We only stood there and saw it for 10 minutes, not sure what happened after.”

Michael, who is a resident in the area, said that many people were celebrating and “drinking a lot” during the long weekend celebrating Chinese New Year.

“I am not sure if this man was drinking but he did not seem very reactive when we signalled for him to get out,” he said.

“I do not think he was endangering anyone but it is a misuse and just not appropriate.

“Unfortunately, as a resident in this area, I do not think people respect the area or beach correctly.

“I can share hundreds of photos of garbage left, and rodents running around.

“It is disappointing to see the aftermath of a popular weekend on Monday mornings.

“It is not fair for the hardworking cleaning people.

“[NParks] is aware of this and I am sure they are doing the maximum to help/prevent this but this is public awareness.

“Leaving your trash, and misusing public property should never be condoned in a country like Singapore.”