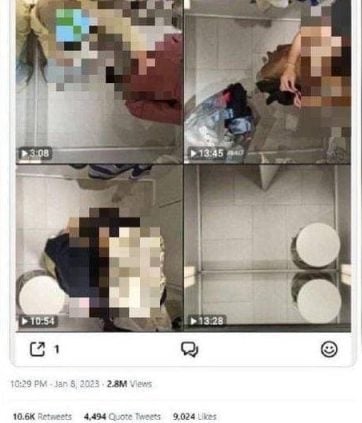 The fitting rooms of clothing stores should remain a safe space for shoppers. It can thus be distressing to find out that some people have no qualms about violating others’ privacy for their own gain.

This was the case in Kuala Lumpur when footage of fitting rooms in H&M outlets emerged, allegedly from hidden cameras.

An investigation into the claims is now ongoing.

According to The Star, the footage first emerged on Twitter.

Users alleged that the perpetrators claimed to have recorded couples and individuals in the rooms and sold the recordings online.

A Twitter user first raised the issue on 8 Jan, stating that a victim had recognised herself in one of the videos. She has since deleted her tweet acknowledging the incident.

The victim had also informed her that the recording might have been taken sometime in October 2022.

Another Twitter user claimed to have spotted her friend in the video.

“In response to recent concerns about hidden cameras in H&M fitting rooms, we have conducted an inspection of the fitting rooms in all H&M stores in Malaysia and are working to ensure that there are no security breaches that will compromise the privacy of our customers,” the company said in a statement.

The Star also reported a police statement confirming the investigation into the matter.

On the afternoon of 9 Jan, the security manager of an outlet at Jalan Imbi in KL lodged a report after coming across the footage on WhatsApp.

An 11-second video from the hidden camera had been uploaded to Twitter and went viral, but was since deleted.

“We sent our personnel there to investigate and could not find the camera. We believe it happened at another location,” Dang Wangi district police chief Noor Dellhan Yahaya said.

But I want to assure the public that we are taking this matter seriously and will conduct a thorough investigation to bring those responsible to justice.

Have news you must share? Get in touch with us via email at news@mustsharenews.com.

Stomper shocked at rise in menu prices ‘because of GST’: Toast Box...
Scroll to top