1124: attacker changes his whatsapp status to “last words are for those with regrets”

between 1124 and 1130: attacker takes an axe and hides in a toilet, apparently with the intention to kill the first person that walks in

1130: attacker attacks the first person that walks in, a sec 1
11:30++: attacker calmly leaves the scene, walks to the water cooler to wash off the blood; tells other students to call the police and that he just killed someone

11.40am: Police receive a call for assistance at RVHS, which is located at 6 Boon Lay Avenue. Officers arrive quickly at the scene and find a 13-year-old student with multiple wounds in a school toilet.

The boy is later pronounced dead by a paramedic.

11.50am: Mr Huang, 43, receives messages from his daughter, a student at RVHS, telling him someone is allegedly armed with an axe.

He tells her to run to a nearby mall, but she is stopped from leaving the school grounds. She later tells him she is safe with the teachers.

He rushes over to the school from his home in Pasir Ris.

1pm: ST arrives at the school. A crime scene investigation van, an ambulance and at least four police vehicles are at the scene.

Students are supposed to be released for their lunch break, but are instead kept in their classrooms.

2pm: An ambulance is seen leaving the school. Students are ushered into the school hall for a briefing by staff.

Some students are allowed to leave school grounds.

2.25pm: A police car is seen leaving the school.

3.20pm: Staff lead students out of the school compound. Several parents are already at the school waiting for their children.

Students believed to be in the alleged assailant’s Secondary 4 class remain in school.

4.30pm: Education Minister Chan Chun Sing posts on Facebook about the incident. The HSA van and police vehicles move to the back of the school.

5.20pm: Police issue a statement saying that a 16-year-old boy has been arrested and will be charged with murder. An axe is seized.

6.15pm: Students of the alleged assailant’s Secondary 4 class are released.

6.30pm: Mr Chan speaks to the media at the school.

7pm: The minister leaves the school. The police hearse leaves soon after.

The 13-year-old was pronounced dead at the scene by a paramedic. An axe was seized by the police as a case exhibit.

“Preliminary investigations revealed that the two male teenagers are not known to each other. Notwithstanding the preliminary findings and the arrest of the teenager, the police are continuing their investigations into the motive for the assault,” SPF said in a news release at 5.20pm.

The 16-year-old will be charged in court on Tuesday with murder. The police said they intend to seek an order from the court to remand him for psychiatric assessment.

Police said they had received a call for assistance at about 11.40am and when officers arrived at the scene, they found a 13-year-old lying motionless with multiple wounds at a toilet.

The teenager was pronounced dead at the scene by a Singapore Civil Defence Force paramedic. The alleged teen assailant was arrested and an axe was seized as evidence.

SINGAPORE – A student of River Valley High School (RVHS) was allegedly killed on campus on Monday (July 19) in an incident which saw staff ordering students to remain in their classrooms.

In a message to parents, the school said a “serious incident” had taken place at the school involving a Secondary one boy.

“The case is now under police investigations and the police are being assisted by a Sec 4 boy,” the school added.

The Straits Times spoke to a parent – Mr Huang, a 43-year-old who works in the IT industry – at about 3pm.

He had rushed to the school after receiving a message from his daughter in Year One that said there was someone allegedly wielding an axe in the school.

Mr Huang showed ST the text message he received from his daughter at 11.50am and a video of students running on school grounds. She texted him about five minutes later, saying the situation under control. But he said he drove from his home in Pasir Ris to the school anyway.

Education minister Chan Chun Sing released a statement at 4.25pm saying his ministry is  working closely with Singapore Police Force on the investigations.

“We are all shocked to receive news of the tragic incident at River Valley High School this morning,” he said, adding that the safety and well-being of students and staff are of paramount importance.

When ST arrived at the school at Boon Lay Avenue at about 1pm, a crime scene investigation van, an ambulance and at least four police vehicles were already there.

The back gate was closed off, but students who needed to leave the campus were allowed to do so past 2pm. The rest were gathered at the school hall and briefed by school staff.

At about 3pm, the rest of the students were allowed to leave the school compound. Several parents were already at the school waiting to pick up their children. A Health Sciences Authority (HSA) van arrived at the scene at about 3.30pm with a forensic science team.

A mother, who wanted to be known only as Madam Chin, said she had received a call from her daughter, who is in Sec 3, at about noon. The 40-year-old, who arrived at the school at 4pm, said her daughter was sobbing on the phone when she called.

The student was unclear about the threat but said she was moved to another classroom, to a safe place with teachers around her. She told her mother she will be released by the school at about 4pm.

RVHS has students aged between 12 and 18, as it offers the six-year Integrated Programme which allows students to skip the O levels and instead take the A levels in their sixth year.

Staff who spoke to The Straits Times said there was supposed to be a lunch break at 1pm, but the students were told to remain in their classrooms instead. No explanation was offered.

This story is developing and will be updated as more details are released. ST has contacted the Ministry of Education, police and the school for comment.

Shin Min Daily News reported that the incident that happened in the afternoon.

The Chinese paper added that the assailant brought a blade to school and attacked the victim.

The police and Singapore Civil Defence Force were alerted and were spotted on site.

The Straits Times reported that the student who was attacked was killed.

A source told Mothership that students were told to stay in the school hall.

There are reports on Twitter and in group chats that there was an axe involved.

According to Shin Min Daily News, some students saw someone holding an axe and standing by the drinking fountain to clean up blood, saying: “I just killed someone.” 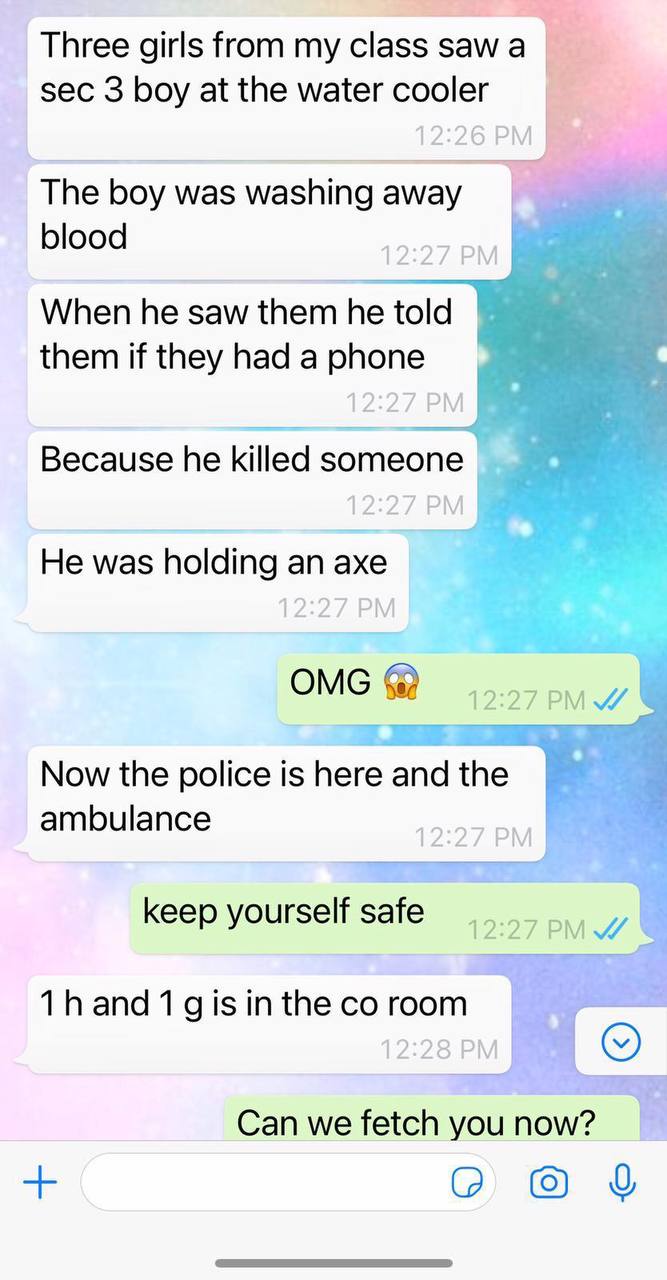 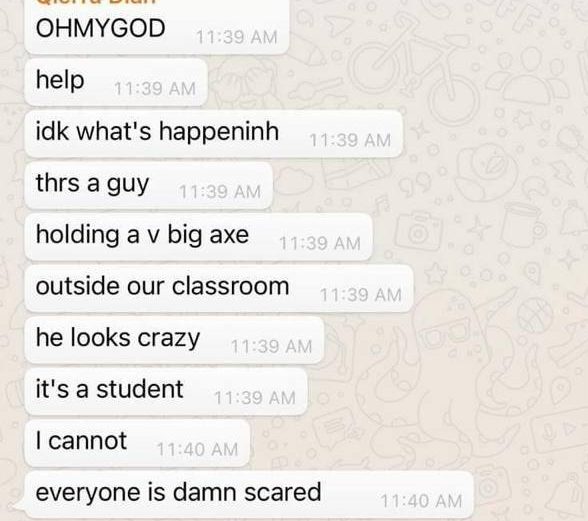 Mothership was on site and saw students being let out of the main gate. Parents were also seen outside the school, waiting to pick up their kids.

Some students who left the school proceeded to the bus stop to make their way home by themselves.

Students whom we talked to said they were instructed not to speak to the media.

Mothership understands that the attacker has been arrested, the victim has been taken away, and the situation is currently under control.

If you or someone you know are in mental distress, here are some hotlines you can call to seek help, advice, or just have a listening ear:

This is a developing story. Refresh this page to get the latest updates.

The state of space tech in Southeast Asia
Scroll to top